skip to main | skip to sidebar

The World as I see it.

The world, how it works, surroundings, myself, etc.

What is this life if, full of care,
We have no time to stand and stare.

No time to stand beneath the boughs
And stare as long as sheep or cows.

No time to see, when woods we pass,
Where squirrels hide their nuts in grass.

No time to see, in broad daylight,
Streams full of stars, like skies at night.

No time to turn at Beauty's glance,
And watch her feet, how they can dance.

No time to wait till her mouth can
Enrich that smile her eyes began.

A poor life this is if, full of care,
We have no time to stand and stare.

Disabling the side mouse button on Evoluent vertical mouse on linux

I switched to the Evoluent vertical mouse after RSI in my wrist. The mouse is great once you get used to it. However, I'm annoyed by its top side button. It gets hit accidentally while browsing and ends up triggerring the back button on a web page. I don't like that.

To disable, figure out the device ID for the Evoluent mouse:
$ xinput list

In my case, the id was 8.
The buttons are listed in order and "xinput query-state 8" shows me that there are 14 of them, as listed under "Button Labels".

The "Button Side" is at the 8th position.

So all that I needed to do was to switch off the button at the 8th position.

That's it. No more accidentally pressing the back button.

Posted by Unknown at 1:08 AM No comments:

The More Loving One

Looking up at the stars, I know quite well
That, for all they care, I can go to hell,
But on earth indifference is the least
We have to dread from man or beast.
How should we like it were stars to burn
With a passion for us we could not return?
If equal affection cannot be,
Let the more loving one be me.
Admirer as I think I am
Of stars that do not give a damn,
I cannot, now I see them, say
I missed one terribly all day.
Were all stars to disappear or die,
I should learn to look at an empty sky
And feel its total darkness sublime,
Though this might take me a little time.
-- W. H. Auden
Posted by Unknown at 9:46 AM 1 comment:

There is Grandeur in this View of Life

I finished reading Richard Dawkins's "The Greatest Show on Earth". As I mentioned earlier, this book provides ammunition for you to confront the irrational types of who believe that God in his mercy created the earth with all the living creatures in it (including humans) in the last 10,000 years. It provides evidence for why evolution is a scientific fact, beyond all reasonable doubt.
The book dives deep into the tons of fossil evidence discovered throughout the earth, which have been meticulously calculated to be in the right order. For example, a flying creature has been discovered to live only after the evolution of wings, not before. Not once has there been any fossil records discovered from the wrong time. If you find one, evolution will be debunked -- I'm not holding my breath.
But here's the kicker: even if there were no fossil records, evolution would still stay ground on the basis of all the other scientific evidences. That we have the arsenal of fossils available to us is a bonus. It further reinforces evolution. Evolution is in line with the myriad forms of life that exist on the planet. It explains why life is imperfect (it's still evolving). It explains why creatures have different abilities depending on their habitat. It does not lead to paradoxes. Compare this with the creationist argument of an intelligent designer (God) where even if you are somehow able to explain who created God, you still have all the explaining ahead of you. Why is there misery? Why is there sorrow (unless of course if you agree that God is a sadist)? Why is that some creatures have acute vision while others are practically blind? Why do we have redundant body parts (appendix, tail bone, ..)? Why do we have body parts which would have been much efficiently designed if an "intelligent" designer was devising them? Evolution answers all of these.
Not that I ever doubted evolution, but I never realized how profound it was in shaping life. Nature cares about only one thing: the survival of the fittest. Period. It doesn't matter if it leads to widespread agony, plague or earth quake. Nature is not interested. At every point the genes undergo random mutation, and nature selectively votes in favor of the ones that have a high chance of survival, thereby carrying forward the genetic code.
The book ends beautifully with: We are surrounded by endless forms, most beautiful and most wonderful, and it is no accident, but the direct consequence of evolution by non-random natural selection -- the only game in town, the greatest show on earth.
There really is grandeur in this view of life.
Posted by Unknown at 9:02 AM No comments:

The Greatest Show on Earth: Evolution

All of us have religious friends, who might otherwise be fairly smart and logical but assume a veil of irrationality when it comes to anything that challenges their "faith". All logic and science is kosher as long as they don't contradict their beliefs. Out of respect you tread not to offend them but at the same time you wish you had solid arguments or anecdotes that could help them discover their irrationality if only one step at a time.
Richard Dawkins's "The Greatest Show on Earth" is just that. Through a series of examples, historical as well as contemporary, worded in layman's vocabulary, he conveys the scientifically observed tenets of evolution. Evolution is not a theory. It's a fact. It's a fact beyond reasonable doubt. It's a fact beyond all doubt. It's a fact. Period. It can be proven with scientific rigor, it can be repeated, and to date there hasn't been a single observation or finding to the contrary.
When you think of evolution you might think of centuries of chiseling of the genetic code through natural selection. The picture of fish to amphibious mammals to apes to humans is all too familiar. But did you know that there are examples of evolution that you can observe in daily life, today? Evolution through natural selection is the reason why every time you have a bacterial infection the doctor requires you to complete your antibiotic dosage -- you're not supposed to terminate it premature even if you feel fine, or else you'd have selected in favor of resistant bacterial mutations before you get rid of the entire population.
I've just finished Chapter 5 and I've already seen several such examples from daily life, as well as examples from radioactive timing of fossils from millions of years of evolutionary life. The grandeur is so beautiful and makes so much sense through an understanding of evolution that you begin to pity the desperate arguments by creationists who believe that all life originated merely some thousands of years ago through the whims of a sad God. The book is absolutely delightful so far.
Posted by Unknown at 11:47 AM 1 comment:

Look not above, there is no answer there;
Pray not, for no one listens to your prayer;
Near is as near to God as any Far,
And Here is just the same deceit as There.
And do you think that unto such as you;
A maggot-minded, starved, fanatic crew:
God gave the secret, and denied it me?--
Well, well, what matters it! Believe that, too.
"Did God set grapes a-growing, do you think,
And at the same time make it sin to drink?
Give thanks to Him who foreordained it thus--
Surely He loves to hear the glasses clink!"
--- Omar Khayyam
Posted by Unknown at 2:44 PM No comments:

A trip to Yellowstone

Yellowstone, the country's first national park, is unlike any other. Every spot in the park reinforces this.

From high mountains to grassy plains, craters to waterfalls, huge trees to wild animals in abundance, each of the 5 entrances to the park presents an entirely different perspective.

We began our visit from its southern neighbor, the Grand Teton park. In retrospect, it wasn't such a good idea. The only thing the Grand Teton park has is the Gand Teton mountain. Nothing else was exciting enough but we fruitlessly spent an entire day looking around in this park. 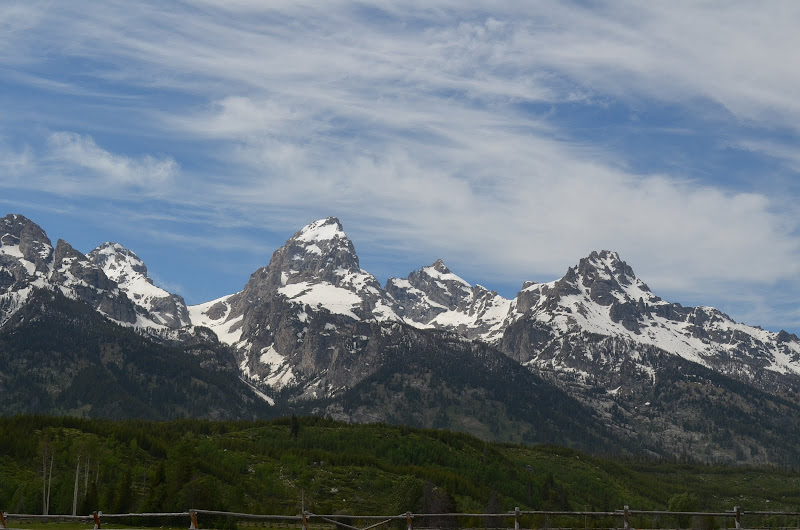 As soon as we entered Yellowstone, it was a dream. Only you could see it living and breathing infront of your eyes. The first wild animal we saw was a bison, a creature which has been living on this earth since the last ice age. With shredded furry coats they looked like having a good time in the summer. In fact, they'd quite often get near the roads, sometimes even block traffic, with onlookers every so happy to point their cameras while they made their way across the road. 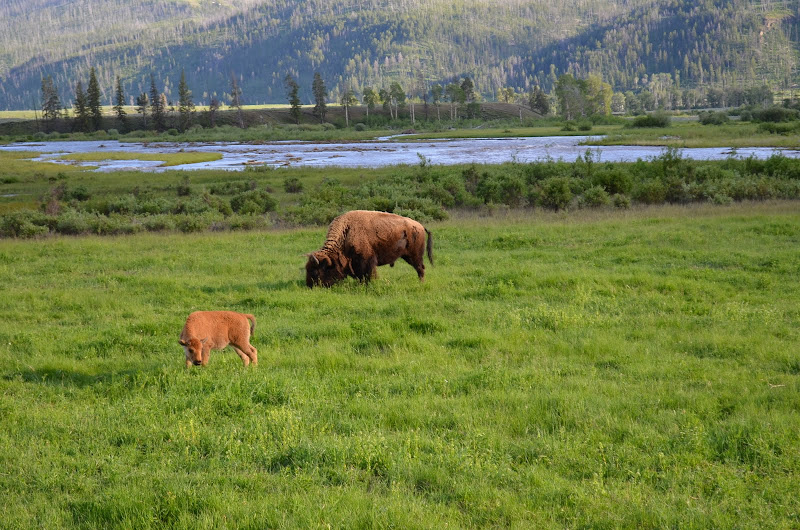 We also saw elks, mule deers and pronghorns. They can be easily seen in the Lamar Valley area, the stretch coming from the north-east entrance of the park. At one spot in Lamar Valley there was a huge lineup of stationary vehicles, so we stopped too. People were peering into the adjacent hill and I was able to see a wolf on its chase. Pretty neat!

I didn't see any bears. In retrospect, that was a good thing, since the very day we made out of the park, someone was killed by a bear in the interiors of the park. When you see a bear, don't run, don't startle, just drop dead. As per common wisdom, that's your best defense. But I think if a bear attacked me I'd attack it directly in its eyes rendering it directionless. I mean how difficult can that be?

Yellowstone has the highest concentration of natural geysers in the world. There are hundreds of them. You can see them active any time, any season. And boy are they colorful! Apparently, aside from the minerals being pushed out from the inside of the earth with the boiling steam, the colors are also caused by some thermophile organisms that live here. Puddles of green, turquoise, greenish-blue, boiling mud, were abundant. It was breathtaking. Nothing like I'd ever seen before. 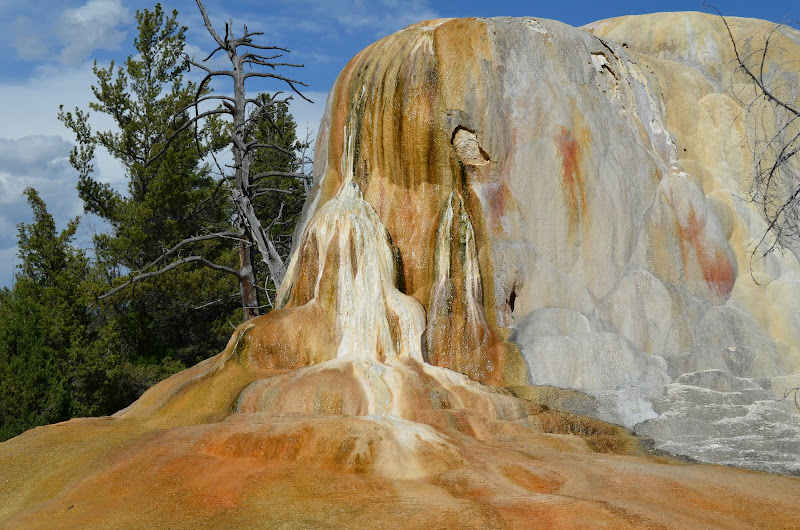 In all it was a memorable trip, well worth the 2500 miles I drove.

This is my personal blog. The views expressed on these pages are mine alone and not those of my employer.